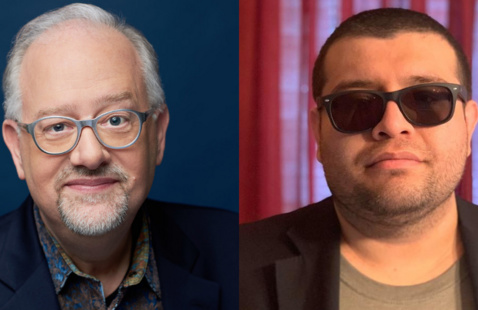 FROM THE DESK OF TARI STRATTON

In 2007, I had the pleasure of creating the new DG seminar series DuoLogues. After having so many terrific conversations with playwrights myself over the years, I yearned to share the idea of conversation and collaborative meetings of the mind, rather than standard interview, with the DG membership. It was a thrill to match one wonderful writer with another wonderful writer and let the discussion flow. We had many delightful and insightful DuoLogue conversations over the years.

As the pandemic raged on last year, I again felt the yearning for conversations about craft, career, and other important topics, so I have decided to reboot DuoLogues.  Welcome to DuoLogues 2.0! One of our first pairings in 2007 was with former DG president Doug Wright (he spoke with the late, great, incomparable Terrence McNally) and I am overjoyed to announce that Doug will be featured at our first event in December, speaking with TX playwright Franky Gonzalez.

I wasn’t content to start with one DuoLogue 2.0 conversation – the following week, we will be treated to a conversation between Kia Corthron and Chisa Hutchinson! I just know that these frank and informal conversations will lead to insights into writing, mentorship, career longevity, sustaining a life in the theater, and more. Each event will be streamed on Zoom; the first hour will be the conversation and the last half hour will be reserved for audience questions. I hope you will join us.

The Guild's DuoLogues seminar series was established to share craft, industry knowledge, and theatrical insights with the DG membership through collaborative conversations, rather than through standard interviews. Originally founded in 2007 by Tari Stratton, who currently serves as Director of the Dramatists Guild Institute, these DuoLogues pair one wonderful writer with another wonderful writer for free flowing discussions.

Doug Wright received the Pulitzer Prize, a Tony Award, the Drama Desk Award, a GLAAD Media Award, an Outer Critics Circle Award, a Drama League Award and a Lucille Lortel Award for I Am My Own Wife, which premiered at Playwrights Horizons in 2003.  For Grey Gardens, he was nominated for Drama Desk and Outer Critics Circle Awards for Best Book of a Musical. Doug won an Obie Award for his play Quills. His screen adaptation was named Best Picture by the National Board of Review and nominated for three Academy Awards.  Plays include Interrogating the Nude, Watbanaland, Posterity, and Unwrap Your Candy. Musical librettos include War Paint, Hands on a Hardbody, and The Little Mermaid. For career achievement, Doug was cited by the Academy of Arts and Letters and awarded the Tolerance Prize from the Kulturforum Europa and in 2010 was named a United States Artists Fellow.  He serves on the Council of the Dramatists Guild and recently stepped down as President.