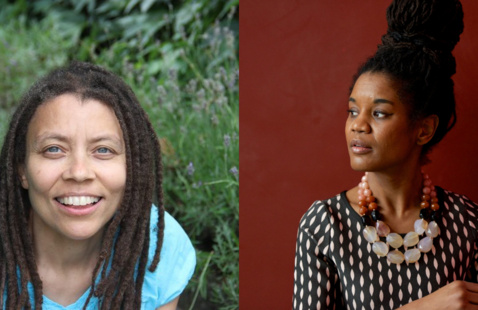 FROM THE DESK OF TARI STRATTON

In 2007, I had the pleasure of creating the new DG seminar series DuoLogues. After having so many terrific conversations with playwrights myself over the years, I yearned to share the idea of conversation and collaborative meetings of the mind, rather than standard interview, with the DG membership. It was a thrill to match one wonderful writer with another wonderful writer and let the discussion flow. We had many delightful and insightful DuoLogue conversations over the years.

As the pandemic raged on last year, I again felt the yearning for conversations about craft, career, and other important topics, so I have decided to reboot DuoLogues.  Welcome to DuoLogues 2.0! One of our first pairings in 2007 was with former DG president Doug Wright (he spoke with the late, great, incomparable Terrence McNally) and I am overjoyed to announce that Doug will be featured at our first event in December, speaking with TX playwright Franky Gonzalez.

I wasn’t content to start with one DuoLogue 2.0 conversation – the following week, we will be treated to a conversation between Kia Corthron and Chisa Hutchinson! I just know that these frank and informal conversations will lead to insights into writing, mentorship, career longevity, sustaining a life in the theater, and more. Each event will be streamed on Zoom; the first hour will be the conversation and the last half hour will be reserved for audience questions. I hope you will join us.

The Guild's DuoLogues seminar series was established to share craft, industry knowledge, and theatrical insights with the DG membership through collaborative conversations, rather than through standard interviews. Originally founded in 2007 by Tari Stratton, who currently serves as Director of the Dramatists Guild Institute, these DuoLogues pair one wonderful writer with another wonderful writer for free flowing discussions.

Kia Corthron is a playwright and novelist. Awards for her body of work for the stage include the 2021 Horton Foote Prize, the Flora Roberts Award, the Windham Campbell Prize, the United States Artists Jane Addams Fellowship, the Simon Great Plains Playwright Award, and the McKnight National Residency. Arena Stage will produce her commissioned Tempestuous Elements in the spring of 2022. Other plays, including A Cool Dip in the Barren Saharan Crick, Breath, Boom, and Force Continuum, have been produced in New York by Playwrights Horizons, New York Theatre Workshop, Atlantic Theater Company, Ensemble Studio Theatre, Manhattan Theatre Club; regionally by Yale Repertory Theatre, Goodman Theatre, Mark Taper Forum, Actors Theatre of Louisville, Center Stage, Hartford Stage, Children’s Theatre Company, Alabama Shakespeare Festival, New York Stage and Film; in London by the Royal Court Theatre and Donmar Warehouse; and elsewhere. She was the 2017 resident playwright of Chicago’s Eclipse Theatre which produced three of her plays. Her debut novel The Castle Cross the Magnet Carter was a New York Times Book Review Editor's Choice and the winner of the Center for Fiction First Novel Prize. Her second novel, Moon and the Mars, was published August 2021. She serves on the Dramatists Guild Council, is a New Dramatists alumnus, and is a member of the Authors Guild.

Chisa Hutchinson (B.A. Vassar College; M.F.A NYU - TSoA) has presented her plays, which include She Like Girls, Somebody’s Daughter, Surely Goodness And Mercy, Whitelisted and Dead & Breathing at such venues as the Lark Theater, Atlantic Theater Company, CATF, the National Black Theatre, Second Stage Theater and Arch 468 in London. Her radio drama, Proof of Love, can be found on Audible (with a pretty boss rating). She has been a Dramatists Guild Fellow, a Lark Fellow, a NeoFuturist, and a staff writer for the Blue Man Group. She’s won a GLAAD Award, a Lilly Award, a New York Innovative Theatre Award, a Helen Merrill Award, and the Lanford Wilson Award. She just released her first feature film, THE SUBJECT, which stars Jason Biggs and Aunjanue Ellis and is available on most major VOD platforms (Amazon, iTunes, Apple TV, etc.). Currently, Chisa is wondering when, if ever, the adaptation of Oliver Twist she worked on for Disney and Ice Cube will go into production, having been pandemically postponed. Meanwhile, she is standing by to begin production for a new TV series for Showtime and is about to embark on another with producers Karamo Brown (Queer Eye) and Stephanie Allain (Hustle & Flow, Dear White People). To learn more, visit www.chisahutchinson.com .