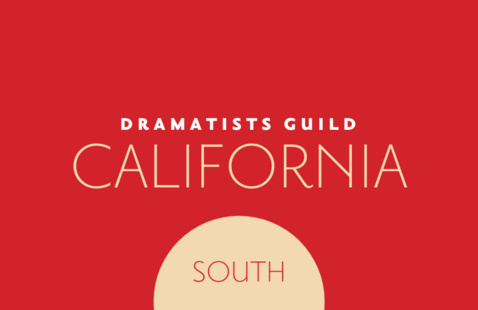 You are invited to a conversation with Andy Knight, literary manager for South Coast Repertory and co director of the Pacific Playwrights Festival, facilitated by Southern California Rep, Diana Burbano.

Andy and Diana will be talking about the processes through which a new play is chosen for development at South Coast Rep. Was it a commission or did it come through the slush pile? How do you put a play together that will grab the initial reader?  What’s the value of staged readings vs productions? We’ll have a wide ranging discussion that will give playwrights insight from the artistic branch of the theatre’s POV.

Andy Knight is South Coast Repertory’s literary manager and co-director of the Pacific Playwrights Festival. At SCR, his dramaturgy credits include the world premieres of Lauren Yee’s Cambodian Rock Band, Qui Nguyen’s Vietgone, Adam Bock’s The Canadians, Catherine Trieschmann’s Theatre for Young Audiences play, OZ 2.5, and the West Coast premieres of Karen Zacarías’ Destiny of Desire and Sarah Burgess’ Kings. His other recent credits include the world premiere of Carla Ching’s The Two Kids That Blow Sh*t Up with Artists at Play. Before SCR, Knight worked at Chicago’s Goodman Theatre.

Since 1983, SCR has awarded 339 commissions to 231 playwrights, composers and lyricists, with more than 50 active commissions. These are the theatre’s most effective means of supporting and developing long-term relationships with writers. Vietgone by Qui Nguyen, Cambodian Rock Band by Lauren Yee, Three Days of Rain by Richard Greenberg, Brooklyn Boy by Donald Margulies, Golden Child by David Henry Hwang​, The Beard of Avon by Amy Freed and A Doll's House, Part 2 by Lucas Hnath were all successful products of SCR commissions.

The theatre has produced 155 world premieres; and, since its founding in 1998, the Pacific Playwrights Festival (PPF), an annual, national showcase of new work, has presented 141 new plays. Ninety percent of PPF works have gone on to productions at SCR and/or other theatres.

The Lab@SCR is South Coast Repertory’s nine-initiative investment in new works for the American theatre​. The Lab@SCR expands and deepen​s SCR’s already-ambitious and nationally renowned new-play development program. The Lab@SCR includes a commitment to a more rigorous development of new American musicals, commissions for playwrights at various stages of their careers, playwright residencies and additional in-house readings and workshops.