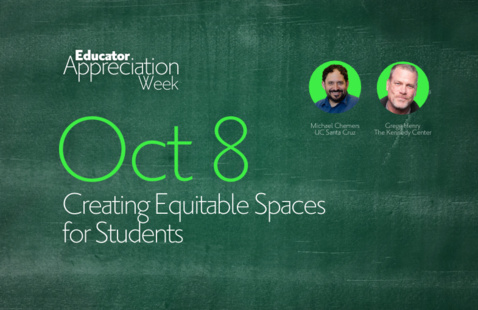 The Dramatists Legal Defense Fund will present their toolkit: Dramatic Changes: A Guide to Producing Live Stage Works on College Campuses in the 21st Century. How do stakeholders on college campuses resolve the tensions that have arisen between the value of free expression on the one hand, and the intense and overdue imperative to advance values of diversity, equity, and inclusion on the other? These are the questions that this document attempts to explore, while providing practical guidance and observations about the challenging process of presenting theatrical productions on college campuses today.

Our week of special online programming will enable you to examine the landscape of higher education, discover the non-traditional ways through which writers can become teaching artists, consider whether a teaching job is right for you, and more. Participants will also engage in lively conversations about the landscape of theatre, and the role that education can play in shaping the next generation of artists.

Michael Chemers researches the “dramaturgy of empathy,” a wide-ranging and interdisciplinary inquiry that seeks to understand how performance culture fosters compassion and kindness (and conversely, fear and hatred). Michael is the creator of the 'Ghost Light' model of dramaturgy: a muscular, creatively engaged, artistically vibrant approach to dramaturgy that requires thorough historical understanding, theoretical training broad and deep, and a passionate dedication to creating powerful, relevant performances of all types. Through his writings, which have been translated into several languages, this model has become popular across the world.

Michael has been at the University of California Santa Cruz since 2012. Prior to that time, he was a professor of Dramatic Literature at Carnegie Mellon University’s School of Drama, where he founded and directed the Bachelor of Fine Arts in Production Dramaturgy Program. Michael’s students are working all over the world as dramaturgs, literary managers, scholars, and artists of all kinds. Michael was also the Director of the Digital Arts in New Media Program (DANM) here at UCSC. His work on the dramaturgy of empathy has led him to research and publish in fields as diverse as Disability Studies, New Media Studies, Social Robotics, Shakespearean Studies, Monster Theory, and the Underground Circus Movement. He has also authored chapters in books on South Park, The Rocky Horror Picture Show, and Game of Thrones.

Gregg Henry is artistic director of the Kennedy Center American College Theater Festival. He is artistic associate for New Works and Commissions for Kennedy Center Theatre for Young Audiences and is director of the Kennedy Center/Kenan Trust Performing Arts Fellowship Program. Gregg has curated the Kennedy Center Page-to-Stage New Play Festival for 15 years. He produces the annual MFA Playwrights’ Workshop at the Kennedy Center in association with the National New Play Network. Recent productions as a director- Theater J: The Christians by Lucas Hnath and Sons of the Prophet by Stephen Karam, for The Welders: happiness (and other reasons to die) by Bob Bartlett, Theater Alliance and Hub Theatre: Wonderful Life by Helen Pafumi and Jason Lott, Hub Theatre: Redder Blood by Helen Pafumi, Theater Alliance: You Are Here by Daniel MacIvor, Round House Theatre: A Sleeping Country by Melanie Marnich, WSC Avant Bard: Two-Headed by Julie Jensen and Scaramouche by Barbara Field, Metro Stage: Girl in the Goldfish Bowl by Morris Panych. Bowie State University: Bengal Tiger at the Baghdad Zoo by Rajiv Joseph. Catholic University of America: Bloody Poetry by Howard Brenton, Swimming With Whales by Bob Bartlett, and Morning, Miranda by Stephen Spotswood. Kennedy Center: Debra Buonaccorsi and Stephen McWilliams’ Flowers Stink (2015 and 2016 at the United States Botanic Garden), The Mostly True Adventures of Homer P. Figg, Teddy Roosevelt and the Treasure of Ursa Major, Teddy Roosevelt and the Ghostly Mistletoe (each by Tom Isbell, the latter two with music by Mark Russell), Six Stories Tall by Marco Ramirez, Dreams in the Golden Country by Barbara Field, The Light of Excalibur by Norman Allen. Gregg has acted, directed, and/or staged the fights with the Colorado, Michigan, Oklahoma and Wisconsin Shakespeare Festivals. He received his MFA from the University of Michigan and has taught for Catholic University, Iowa State University, American University in Cairo, and Western Michigan University. He is a proud member of the Dramatists Guild of America.