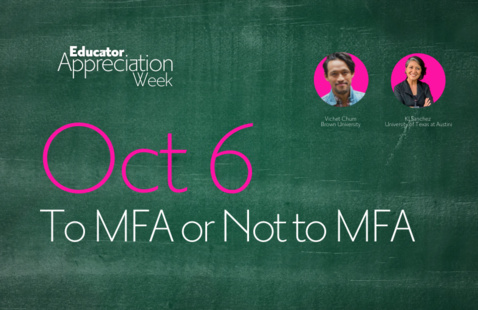 Is a Master’s degree right for you? Hear from professors in the field as they discuss today's higher education landscape and the opportunities that are available for working artists.

Vichet Chum is a Cambodian-American playwright and theater maker, originally from Dallas, Texas and now living in New York City. His plays have been workshopped at Steppenwolf Theatre, the Magic Theater, the Alley Theatre, the UCROSS Foundation, Fault Line Theatre, Crowded Outlet, Second Generation Productions, Weston Playhouse, Cleveland Public Theatre, All For One Theater, Amios, Florida State University, Merrimack Repertory Theatre and the New Harmony Project. He received 2018-19 Princess Grace Award in Playwriting with New Dramatists and is a current board member for the New Harmony Project. Vichet was a part of the 2019-20 Resident Working Farm Group on Ryder Farm and currently the 2020-21 Interstate 73 Writer's Group at Page 73 and the 2020-21 Ars Nova Play Group. His play High School Play: A Nostalgia Fest will have its world premiere at the Alley Theatre in 2021. His play Bald Sisters will have its world premiere at Steppenwolf Theatre Company in the 20/21 season. He is currently working on commissions for Audible, Cleveland Playhouse, Merrimack Repertory Theatre. He is a proud graduate of the University of Evansville (BFA) and Brown University/Trinity Repertory Company (MFA). He's represented by Beth Blickers at APA.

KJ Sanchez is the head of Playwriting/Directing and runs the M.F.A. in Theatre (Directing) program. She is a director, producer, playwright and sometimes actor. She’s the founder and CEO of American Records, dedicated to making theatre that chronicles our time, theatre that serves as a bridge between people. Sanchez recently directed Octavio Solis’s Quixote Nuevo, which was produced at Hartford Stage, Huntington Theatre Company in Boston and Alley Theatre in Houston.

As an actor, Sanchez performed at the Brooklyn Academy of Music and internationally including the Toga-Mura Festival in Japan and the IberoAmericano Festival in Bogota, Columbia. She is the voice of many characters on the cartoons Dora the Explorer and Go, Diego, Go!. Sanchez is a Fox Fellow, Douglass Wallop Fellow and a recipient of the 2014 Rella Lossy Playwright Award and the National Endowment for the Arts/TCG Career Development Program.