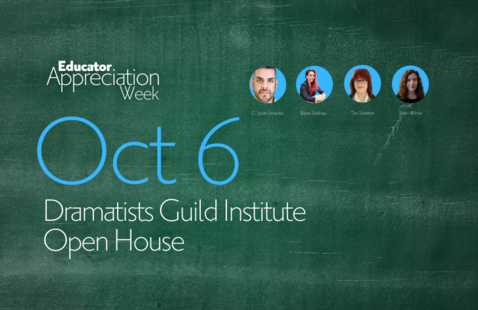 In this two-hour event, highlighting four of the Institute's most popular classes, participants will get to experience a taste of what it's like to take a DGI class. They'll also hear from current DGI instructors, who will share teaching insights and methodology.

Hosted by DGI Executive Director Tari Stratton, this two-hour event will highlight four of the Institute's most popular courses, giving you a taste of what it's like to take a DGI class. You'll also hear from current DGI instructors, C. Julian Jimenez, Rona Siddiqui, and Sheri Wilner, who will share teaching insights and methodology.

The Dramatists Guild Institute offers hands-on, rigorous training for writers at all skill levels, providing students with an engaging and empowering educational experience. Now, more than ever, the opportunities for self-expression and connection through storytelling sustain us and reinforce our community of dramatists.  Due to the COVID-19 pandemic, our 2021/2022 course offerings will ALL take place online.

Rona Siddiqui is an award-winning composer/lyricist, orchestrator and music director based in NYC. She is the recipient of the 2020 Jonathan Larson Grant and the 2019 Billie Burke Ziegfeld Award, and was named one of Broadway Women's Fund's Women to Watch. Her show Salaam Medina: Tales of a Halfghan, an autobiographical comedy about growing up bi-ethnic in America, had a developmental workshop at Playwrights Horizons November 2019. She has also received the ASCAP Harold Adamson Lyric Award, the ASCAP Foundation Mary Rodgers/Lorenz Hart Award, and the ASCAP Foundation/Max Dreyfus Scholarship. She performed her concert Rona Siddiqui: Halfghan on a Mission at the John F. Kennedy Center for the Performing Arts. Her musical One Good Day (book & lyrics by Liz Suggs) was selected for the ASCAP/Dreamworks Musical Theatre Workshop with Stephen Schwartz in L.A. and was named one of the Best New Musicals of 2014 by the Festival of New American Musicals. Rona composed the music for an original 20-minute musical about Afghanistan, The Tin, which was selected to be part of the Samuel French OOB Short Play Festival in 2012. Her musical Treasure in NYC (book & lyrics by Laura Kleinbaum), an immersive musical adventure for autistic children, has been produced at The Cell. She is honored to be part of the 2020/21 MTF Maker and Ars Nova Vision Residencies. She has been commissioned to write songs for Wicked's 16th Anniversary Commemoration, Flying Free, Broadway Inspirational Voices, The Civilians, Pittsburgh CLO, the NYC Gay Men's Chorus, MuseMatch, 52nd St. Project, and the web series Amateur Dicks. She has been a featured songwriter in concert venues such as 54 Below, Joe's pub, and New York City Center. Original scores she has written for plays include Middletown, The Vagina Monologues, The Good Person of Szechuan, The Clean House, and Love Song of J Robert Oppenheimer. Rona music directed the Off-Broadway Pulitzer Prize-winning A Strange Loop for which she received an Obie along with the cast and creative team (Playwrights Horizons), Bella: An American Tall Tale (Playwrights Horizons), and Who's Your Baghdaddy: Or How I Started the Iraq War (St. Lukes Theatre). She has orchestrated for Broadway Records, Broadway Backwards, NAMT and Pittsburgh Civic Light Opera. She received her Masters from NYU’s Graduate Musical Theatre Writing Program.

Tari is a member of the Guild’s Education, Awards, DEI, and Copyright Advocacy committees.  She helps produce the Dramatists Guild’s regional and national conferences, their annual Awards Night, and other special events such as the Anti-Piracy Blast to stop sheet music online piracy, and Copyright Matters, a program presented at the Library of Congress. Tari is an instructor with the DGI and has also represented the Guild at various conferences around the country, including KC/ACTF, BroadwayCon, the Austin Film Festival, the Edinburgh Festival Fringe, and the Association for Writers and Writing Programs. She is proud to serve on committees with the Guild, the League of Broadway Theaters and Producers, and the Alliance for Inclusion in the Arts to increase diversity in the performing arts and has worked with the planning committee of the Dramatists Guild’s new podcast, TalkBack.

Before joining the Guild, Tari worked as an actress and/or theater administrator at theaters across the country, including Ohio, Detroit, Woodstock, NYC, and Cedar City, Utah.  She also taught theater at Fordham University, Lincoln Center campus.  Other teaching includes courses in theater history, acting and scene study.  She has a BFA in acting /directing from Kent State University and an MFA in theater management from Wayne State University.

Sheri Wilner's plays include Kingdom City, Father Joy, Hunger, The End, A Tall Order, Relative Strangers, Little Death of a Salesman, The Unknown Part of the Ocean, and Joan of Arkansas and have been performed and developed at major American regional theatres including the La Jolla Playhouse, the Old Globe, Actors Theatre of Louisville, Eugene O'Neill Playwrights Conference, Guthrie Theater and the Williamstown Theatre Festival. In New York her work has been presented by New Georges, Naked Angels and the Lark.

She has twice been a co-winner of the prestigious Heideman Award granted by the Actors Theatre of Louisville: in 1998 for Labor Day, which premiered at the 1999 Humana Festival, and in 2001 for Bake Off, which premiered at the 2002 Humana Festival. Bake Off was praised by The New York Times as a “barbed, witty, thoughtful, giggle and snort inducing satire on gender roles.” She co-wrote the libretto for a full-length musical version, entitled Cake Off, which premiered at the Signature Theatre in Washington, D.C. (nominated for a Helen Hayes Award for Outstanding Original Musical Adaptation); workshopped at the Old Globe in San Diego; and produced by the Bucks County Playhouse, starring Euan Morton and Justin Guarini.

Her plays have been published in over a dozen anthologies, and Playscripts.com has published twelve of her one-acts, which have received over four hundred productions across the United States as well as in Australia, Denmark, Germany, Ireland, Japan, United Kingdom and India.