"Dreaming the Queer Future" with Peppermint and the New Visions Fellowship 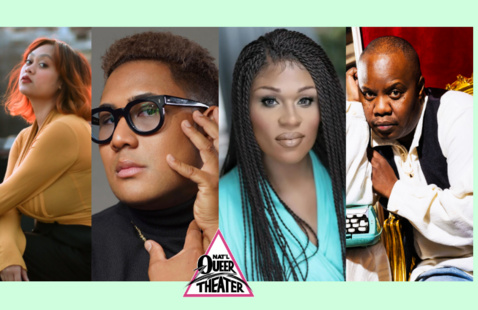 Activist and international star Peppermint (she/her) will host an online conversation on Tuesday, October 19 at 6pm ET (5pm CT, 4pm MT, 3pm PT) with the recipients of the 2021-22 New Visions Fellowship, Ayla Xuan Chi Sullivan (they/them) and Nick Hadikwa Mwaluko (he/they), along with New Visions Lead Mentor, Roger Q. Mason (they/them) on the importance of transgender and gender non-conforming representation in the American Theatre. The conversation, which was originally scheduled for July 8, will take place on Zoom and will explore how TGNC-led stories and characters on stages have the capacity to humanize through art, and how other TGNC artists and individuals can begin to imagine more fully realized lives as individuals in society as a result. This event will be FREE and open for all to attend

This summer,  National Queer Theater and the Dramatists Guild of America launched the New Visions Fellowship, a rigorous year-long professional development program created to uplift the voices of Black transgender and gender non-conforming (TGNC) theatre writers in the face of the systemic exclusion they have endured within American theater. Ayla and Nick are the inaugural recipients of the Fellowship.

The entertainment industry struggles not only depicting TGNC lives-it falls short of hiring trans people to tell our own stories. This is especially true in American theater; the Asian American Performers Action Coalition's latest Visibility Report reported that of the 37 shows that either opened or were slated to open on Broadway, none featured trans roles. According to Production Pro, this past season had 365 titled characters, of which only 0.27% of roles were "nonbinary plural." The Actor's Equity Association's latest DEI report found that, from 2016 to 2019, a total of 93,957 Equity contracts were issued nation-wide. Of those contracts, only 0.65% were issued to actors who self-identify as transgender or non-binary.

TGNC actors and artists struggle with un- or under-employment, and when successes happen, they're often exceptions to the rule. But when trans people are un- or under-represented in the media, it plays a role in how our community is seen and humanized. The New Visions Fellowship was established as a program seeking to address these disparities.

The 2021 New Vision Fellowship playwrights will each be awarded $5,000, fully funded by National Queer Theater, to develop a play, musical, or performance experience of their design and choosing. The theater will host a professionally cast and directed reading of their play at the end of the program. Fellows will also have the opportunity to participate in professional development sessions covering a wide range of artistic topics. In addition, they will receive a five-year complimentary membership to The Dramatists Guild including access to contracts, business advice, and career services, to help protect the artistic and economic integrity of their work.

To read more about the Fellowship and/or to donate, please visit https://www.nationalqueertheater.org/new-visions-fellowship.

To register to attend this webinar live, CLICK HERE.