EAW21: When and How to Enter the Higher Education Sector 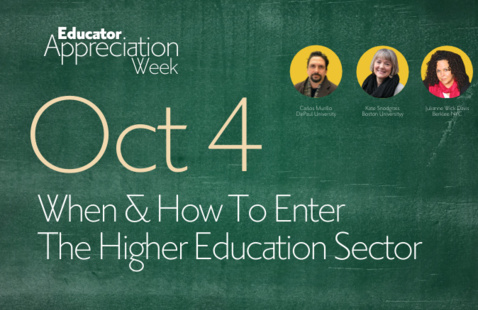 This webinar on Entering the Higher Education Sector is a practical session designed to help participants create teaching statements, craft resumes, and discover the best way to do a job search in higher education.

Carlos Murillo is an internationally produced playwright, director and educator. He is currently the Chair of Theatre Studies and Head of BFA Playwriting at The Theatre School of DePaul University in Chicago. Awards and honors include: the Mellon Foundation National Playwrights Residency at Adventure Stage, a Doris Duke Impact Award, a Distunguished Play Award from AATE, the Frederick Loewe Award from New Dramatists, a MetLife/Nuestros Voces Award from Repertorio Español, the Otis Guernsey Award from the Inge Festival, two National Latino Playwriting Awards from Arizona Theatre Company and others.

Carlos has guest taught at University of Iowa, The Kennedy Center, Carnegie Mellon, Transylvania University and others. He currently serves on the Board of Directors of MacDowell.

Kate Snodgrass is the Artistic Director of Nobel Laureate Derek Walcott’s Boston Playwrights' Theatre and Co-Founder of the Elliot Norton Award-winning Boston Theater Marathon, now in its 24th year. She directs the MFA in Playwriting Program at Boston University and is a former National Chair of Playwriting with the Kennedy Center American College Theater Festival. A StageSource 2001 “Theatre Hero,” Kate was awarded Boston's Theatre Critics’ Elliot Norton Award for Sustained Excellence in 2012. As a playwright, her radio play Overture can be heard on the Huntington Theatre website in “Dream Boston.”

Julianne Wick Davis (composer/lyricist) received the Jonathan Larson Award in 2012 and was the 2018 recipient of the Billie Burke Ziegfeld Award for Outstanding Female Musical Theater Composer. Named one of the Fifty Women to Watch in 2020 by the Broadway Woman’s Fund, Julianne also received a 2020 Lotte Lenya Competition Songbook Series Award from the Kurt Weill Foundation. TREVOR (music) with Dan Collins (book and lyrics) had its world premiere at Writer’s Theatre, Chicago which received a Jefferson Award for Outstanding New Musical. Trevor is slated to open off-Broadway in 2021. SOUTHERN COMFORT with Collins, received a production at The Public Theatre which was a NY Times Critic’s Pick and received Lortel and Outer Critics Circle Nominations for Outstanding Musical. SOUTHERN COMFORT was also a part of the 2012 NAMT Convention, received a production at Barrington Stage Company, a reading at Playwrights Horizons, and  a developmental production at CAP21 which garnered a GLAAD Media Award and was a TimeOut NYC and NY Times Critic’s Pick.  THE PEN for Inner Voices with Collins was also named a NY Times Critic’s Pick.  WHEN WE MET (music & lyrics), was a part of the O’Neill Musical Theater Conference, York NEO Development Series, Broadway Bound Concert Series, and received a developmental production at CAP21. THE WILLARD SUITCASES (book, music, & lyrics) had its world premiere at American Shakespeare Center in Fall of 2019 and was named one of the Top 10 2019 Theatrical Events by the Washington Post and was also featured in the Broadway Bound Series at Merkin Hall. LAUTREC AT THE ST. JAMES (music) with John Dietrich (book and lyrics), was selected for the NAMT 2019 Conference, and will be a part of the Applause Concert Series at the Olney Theatre Center in 2021.  Julianne has also contributed two songs for Shakina Nayfack’s MANIFEST PUSSY and was commissioned to write a song for Lonny Price’s Lincoln Center Originals series. She is a Dramatist Guild Fellow, York Theatre’s NEO 9 Emerging Writer, Sundance Fellow at Ucross, and received her MFA from NYU’s Tisch Graduate Musical Theatre Writing Program. Julianne is a member of ASCAP and the Dramatist Guild.