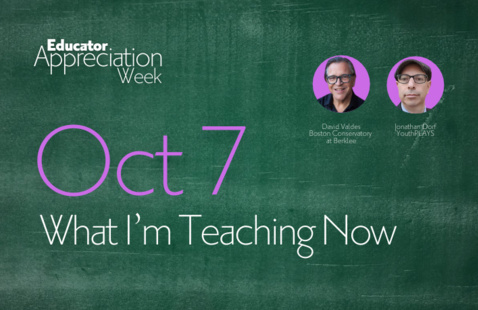 Are you a teacher looking for ways to invigorate your curriculum and lesson plans?  Join us for a discussion that will provide you with tools, resources, and lesson ideas to help you introduce your students to a broader array of playwrights and plays that may not be on your radar.  You'll also have the opportunity to join breakout rooms with fellow educational professionals, and to take part in conversations on what they are currently teaching in their classrooms.

Our week of special online programming will enable you to examine the landscape of higher education, discover the non-traditional ways through which writers can become teaching artists, consider whether a teaching job is right for you, and more. Participants will also engage in lively conversations about the landscape of theatre, and the role that education can play in shaping the next generation of artists.

Jonathan Dorf has had his plays produced throughout the United States and Canada, as well as on every continent except Antarctica. He has been a finalist for the Actors Theatre of Louisville Heideman Award, the Weinberger Playwright Residency, the Charlotte Repertory New Play Festival, and the InterAct New Play Festival. His work has been seen at Playwrights Theatre of New Jersey, Ensemble Studio Theatre - LA, Moving Arts, and the Pittsburgh New Works Festival, and he has had plays for young people commissioned by the Walnut Street Theatre, Coachella Valley Repertory, and the Choate Rosemary Hall Summer Arts Conservatory, where he served as playwright-in-residence. In addition to his many works with Playscripts, plays include Ben, Bookends, Shining Sea, Milk and Cookies, Beef Junkies, Supermodels in Jeopardy, and Neverland, while such works as 4 A.M. (the musical), From Shakespeare With Love?, Now You See Me, Dear Chuck, War of the Buttons, and Me, My Selfie & I were created specifically for school-age actors and audiences. A number of his monologues are published in collections by Playscripts, Inc., Meriwether and Smith & Kraus, and his published plays make their homes at Playscripts, Inc., Brooklyn Publishers, Heuer, Original Works, and YouthPLAYS, the publisher of plays for young actors and audiences he co-founded. He is also co-created ProduceaPlay.com, the web's foremost resource site for producers, and authored Young Playwrights 101, a complete playwriting text for young playwrights and those who teach them.

Long-time playwriting advisor for Final Draft and The Writers Store (author of Playwriting101.com and playwriting instructor at Screenwriters University), Mr. Dorf has also served as Visiting Associate Professor of Theatre in the graduate playwriting and children's literature programs at Hollins University, and as the United States cultural envoy to Barbados. He is the co-chair of the Alliance of Los Angeles Playwrights, a life member and former managing director of the Philadelphia Dramatists Center, and a member of the Dramatists Guild of America and the Guild's education committee. He holds a BA in Dramatic Writing and Literature from Harvard University and an MFA in Playwriting from UCLA, and works with playwrights and screenwriters internationally as a script consultant. He has been a guest artist at the International Thespian Festival, Educational Theatre Association Annual Conference, Asian Festival of Children's Content, the Tennessee Arts Academy, as well as at numerous schools and festivals. He is available for playwriting workshops and residencies worldwide through his JonathanDorf.com website.

David Valdes joined the Boston Conservatory in 2017 as an associate professor of theater and teaches playwriting in the contemporary theater program. Valdes is the author of plays which have been staged across the United States and abroad. His work has been seen with Huntington Theatre Company, Ensemble Studio Theatre, Portland Stage, New York Theatre Workshop, Actor's Theatre of Charlotte, the Humana Festival, Company One, the National New Play Showcase, and others. He has been a fellow with Company One, Huntington Theatre Company, Cimientos, and the Boston Foundation.

Productions include Last Catastrophist, The Mermaid Hour, Raggedy And, Bully Dance, Full Code, Widow of Abraham, Wandaleria, and Brave Navigator, among others. Recent work includes Much Undone (Shakespeare’s New Contemporaries shortlist), Up the Ladder Down the Slide (National Showcase of New Plays, Orlando Shakes), and Downtown Crossing, a docudrama based on two years of interviews with Boston’s undocumented communities. His play Brave Navigator is published by Samuel French, and he is the author of five books, including Homo Domesticus: Notes from a Same-Sex Marriage and Spin Me Right Round, coming in 2021.

As a gay Cuban-American, Valdes’s work foregrounds BIPOC and LGBTQ characters and is intentionally intersectional in nature. He believes that Black lives matter, trans rights are human rights, and that heteronormativity, ableism, and classism must be actively unlearned.